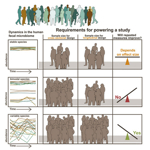 Dynamics of the normal gut microbiota: A longitudinal one-year population study in Sweden

In this study, Lisa Olsson, Valentina Tremaroli and co-authors, investigated the temporal dynamics and the extent of intra- and inter-individual variation for the composition and functional potential of the normal gut microbiota. Our analyses showed that the intra-individual variation accounted for a large portion of the total variation in gut microbiota composition (23%) and that several functional pathways were highly dynamic (median ICC ≈ 0.5).

However, we observed that the extent of intra-individual compositional variation was individual specific and lower in communities with high relative abundance of F. prausnitzii, B. longum, and B. breve, as well as with low temporal variation of F. prausnitzii and low abundance of the ato terminal gene for butyrate synthesis. We noted that all communities, both stable and variable, displayed occasional blooming of species and potential functions belonging to Enterobacteriaceae and other facultative anaerobic or aerotolerant bacteria. Therefore, our results suggest that these fluctuations are part of normal gut microbiota dynamics and homeostatic interaction with the host.

The metabolic role and therapeutic potential of the microbiome

To the review published in Endocrine Reviews 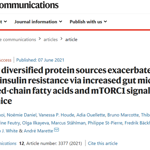 Here, we show that a mixture more representative of the complex composition of dietary protein consumed by humans in western societies promotes distinct metabolic perturbations, such as increased weight gain and insulin resistance, compared to a diet containing only casein and we explore the potential role of the gut microbiota in these effects. More specifically, we show the impact of consuming mixed dietary proteins compared to casein on liver metabolism through incomplete mitochondrial oxidation of fatty acids, as well as the activation of the mTORC1/S6K1 signaling pathway. These findings highlight the importance of considering protein sources in the diet of animal models of diet-induced obesity.

To the article in Nature Communications 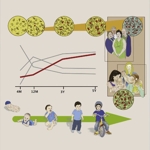 The gut is inhabited by a densely populated ecosystem, the gut microbiota, that is established at birth. However, the succession by which different bacteria are incorporated into the gut microbiota is still relatively unknown. Josefine Roswall, Lisa Olsson et al analyze the microbiota from 471 Swedish children followed from birth to 5 years of age, collecting samples after 4 and 12 months and at 3 and 5 years of age as well as from their mothers at birth using 16S rRNA gene profiling. We also compare their microbiota to an adult Swedish population. Genera follow 4 different colonization patterns during establishment where Methanobrevibacter and Christensenellaceae colonize late and do not reached adult levels at 5 years. These late colonizers correlate with increased alpha diversity in both children and adults. By following the children through age-specific community types, we observe that children have individual dynamics in the gut microbiota development trajectory.

To the article in Cell Host & Microbe