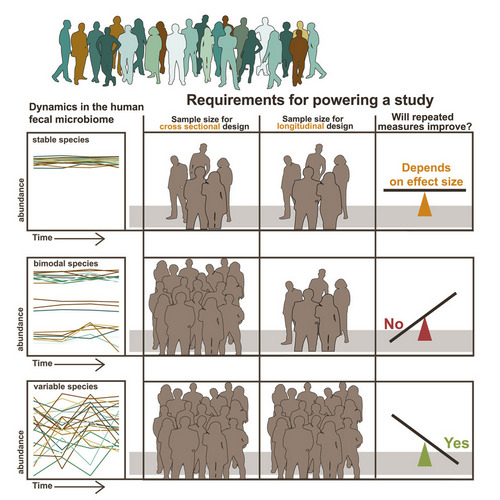 Dynamics of the normal gut microbiota: A longitudinal one-year population study in Sweden

In this study, Lisa Olsson, Valentina Tremaroli and co-authors, investigated the temporal dynamics and the extent of intra- and inter-individual variation for the composition and functional potential of the normal gut microbiota. Our analyses showed that the intra-individual variation accounted for a large portion of the total variation in gut microbiota composition (23%) and that several functional pathways were highly dynamic (median ICC ≈ 0.5).

However, we observed that the extent of intra-individual compositional variation was individual specific and lower in communities with high relative abundance of F. prausnitzii, B. longum, and B. breve, as well as with low temporal variation of F. prausnitzii and low abundance of the ato terminal gene for butyrate synthesis. We noted that all communities, both stable and variable, displayed occasional blooming of species and potential functions belonging to Enterobacteriaceae and other facultative anaerobic or aerotolerant bacteria. Therefore, our results suggest that these fluctuations are part of normal gut microbiota dynamics and homeostatic interaction with the host.